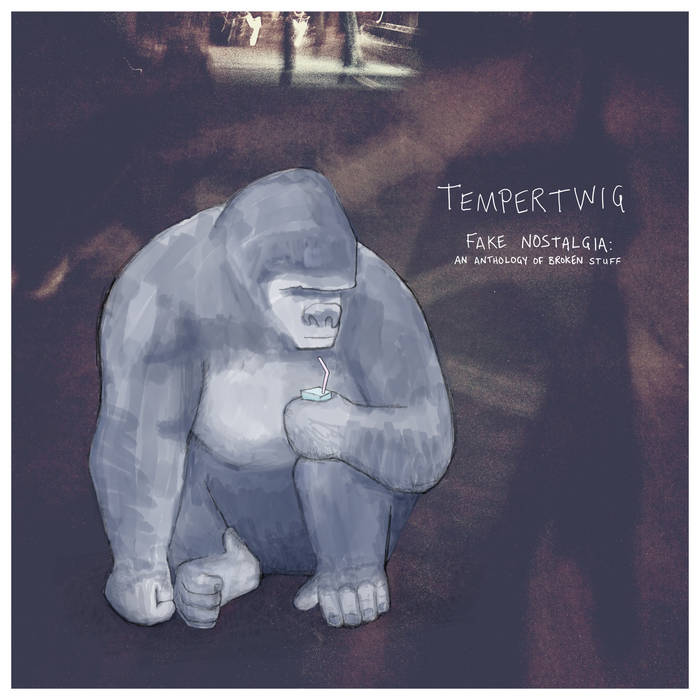 This album really makes me feel nostalgic. The best album I ever heard so far. Favorite track: Falling Apart.

Jeremy / HI54LOFI love me some nostalgia, even if it is fake - you could call it my c-c-c-comfort blanket Favorite track: Comfort Blanket.

Jamie (Audio Antihero) Fans of Nosferatu D2 and Superman Revenge Squad should check out this killer early project from the Parker brothers. Favorite track: Everything Can Be Derailed.

Tempertwig (1999-2004) were a three piece from South London. They featured Ben and Adam Parker of the acclaimed groups Nosferatu D2 (nosferatud2.bandcamp.com) and The Superman Revenge Squad Band (thesupermanrevengesquadband.bandcamp.com).

"Angled hooks, mathematical elasticity, and unbridled ferocity, the Parker brothers are the lost pioneers of the indie-emo scene." - Cereal and Sounds

"It’s a cliché to say that the Parkers were ahead of their time – but it’s certainly true that the songs on FAKE NOSTALGIA are as relevant now as when they were recorded almost twenty years ago." - Beautiful Freaks

"It may have been written almost twenty years ago, yet listening to this collection, Tempertwig feel like they were not a band who ever really tried to fit in, as such they sound as fresh and intriguing now as they ever did." - For the Rabbits

"It's simply stunning and sounds like the future even though it's over 15 years old." - The Devil Has the Best Tuna

"Melancholic, tired anger...classic Parker brothers, the vulnerable honesty balanced with an unceasing self-consciousness, the cost of trying to communicate candidly in a culture that Mark Fisher labels ‘capitalist realism’—where everything has long since been used up and commodified, and nothing new can emerge." - Various Small Flames

FAKE NOSTALGIA: An Anthology of Broken Stuff is a collection of Parker brothers material from their early and urgent days. Lyrical, frantic, minimalistic and eclectically unpredictable, theirs is a sound which has launched labels a decade apart. This collection is released by Audio Antihero Records, who formed in 2009 to release Nosferatu D2’s lone album, and, the fledgling Randy Sadage label, who are debuting in 2019 to release this Tempertwig anthology. This music means a lot to a few.

* "Comfort Blanket" and "Everything Can Be Derailed" were premiered by Various Small Flames - varioussmallflames.co.uk/2019/03/07/tempertwig-comfort-blanket-everything-can-be-derailed

* "This Means Everything, This Don't Mean a Thing" was premiered by Beautiful Freaks -
beautifulfreaks.co.uk/features/2019/03/premiere-tempertwig-this-means-everything-this-dont-mean-a-thing

* "Apricot" was premiered on For the Rabbits - fortherabbits.net/2019/03/21/premiere-tempertwig-apricot/

"The songs on this album were recorded over the duration of the lifespan of tempertwig, starting from when we got half-decent and finally got rid of our initial set of songs. From memory, I believe they incorporate recordings by Paul Tipler (who, importantly to me at the time, had preciously recorded Leatherface at their peak), the engineer at a place in Oxford, Adam (tempertwig drummer) and our brief second-guitarist Mark. Put together, I think they represent the setlist of our last gigs.

The band were made up of me, my brother Adam, and our friend Daniel. Highlights included the time "Comfort Blanket" was played by Steve Lamacq on Radio 1 and described us as "Jarvis Cocker singing with Dinosaur Jr", and being asked to headline in Bath based upon one listen by a very enthusiastic promotor. Lowlights included a gig at the Hope and Anchor when a skinhead threw sandwiches at us, and turning up at the gig in Bath to play to an audience made up of just one very enthusiastic promotor.

We wrote the songs back in the early 2000s and, thanks to this release, I'm listening to them for the first time since now. I can enjoy them now, because enough time has passed that they sound like someone else. I'm not sure they sound like the mixture of the Afghan Whigs and Arab Strap that I was initially aiming for, but maybe that's not such a bad thing after all.” - Ben Parker (2019)

"FAKE NOSTALGIA" is an anthology release of pre-Nosferatu D2 material from the Parker brothers.

Bandcamp Daily  your guide to the world of Bandcamp